After Friday’s announcement that the company would be laying off 7% of its staff and cutting its guidance, skeptics started to ask the question of how the company was going to continue to run its business with what already felt like a bare bones staff.

Current owners are about to experience what it’s like to have zero customer support. All $TSLA cost centers are in service/repair, the opposite of every other auto co., because of terrible initial product quality. https://t.co/1JJaYGDkRi

I suppose with thousands fewer employees the $TSLA customer service and post-sales experience will be that much better.

How will staff cuts affect $TSLA owners who have had their cars in service for months? How will it affect the quality of cars being produced? Who has to pick up the extra hours now? How far can you bend employees/customers before they break? The self-fulfilling spiral continues.

There appears to have been a deluge of complaints on social media and owner forums, not only about the quality of vehicles, but also about the time with which it takes to get them serviced. Some Tesla owners claim to be experiencing significant delays in waiting for their vehicles to get serviced, sometimes waiting weeks or months before getting their vehicles back.

And now it looks as though the customer service at Tesla may be getting even slower.

Social media sleuths over the weekend began to point out that Tesla’s customer service email inbox appeared to no longer be accepting e-mails. According to several Twitter users, inquiries e-mailed to [email protected], which is listed on the company’s website as its main customer service e-mail, were bouncing back to senders.

Confirmed. Tesla’s customer support email bounces. This is what I got. Mailbox full. Perhaps someting to do with thousands of people being let go? pic.twitter.com/DuhytRJTB4 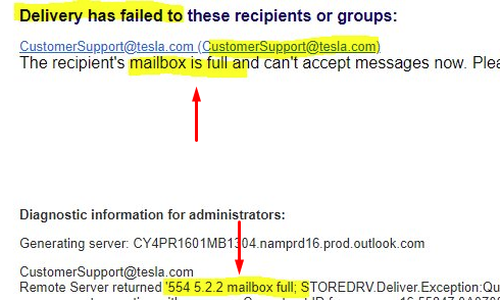 Many Twitter users reportedly got the same response (additional links here and here). 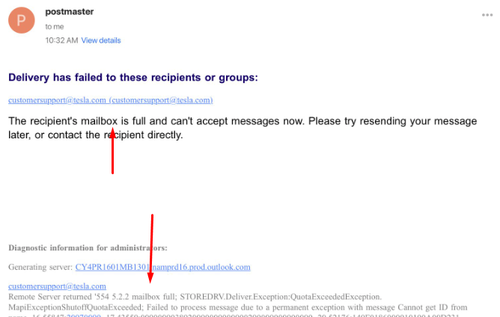 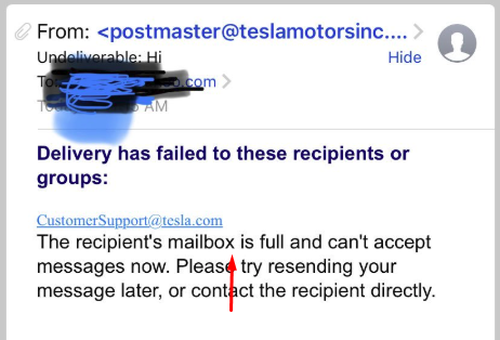 As a reminder, the response time for Tesla service has been an ongoing complaint on social media since the company began to spread out “mass market” Model 3 inventory across the nation.

For now, it looks as though the problem may have been rectified. Late in the day on Sunday, when we tried to send an email to the same address, we got no immediate response.

But again, these kinds of bush league screw ups have to leave investors (and especially Tesla owners) asking the question of how much more the company can sacrifice from its workforce before efficiency takes a brutal hit. Not only that, but now that the rank-and-file employees are likely being stretched even more to work as much as humanly possible, how much longer can they last as believers?

And if you want to argue that Tesla is a technology company and not a car company, why not start with getting the basics of E-Mail 101 down first.