Authored by José Niño via The Mises Institute,

On June 23, 2016, the British electorate voted 51.9 percent-48.1 percent in favor of the United Kingdom leaving the European Union. The referendum was one of the biggest political earthquakes that preceded the election of Donald Trump on November 6, 2016. 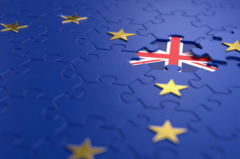 The reasons for leaving were numerous ranging from: questionable immigration policies, concerns over Brussels micromanaging British affairs, and whether remaining in the EU is in the best economic interests of the UK. Currently, if Theresa May’s government cannot reach a deal with the EU before the March 29 departure date, the UK will leave the EU, deal or no deal.

There are three advantages to Brexit, from the standpoint of political and economic liberalization:

The EU originally started out as a customs union that dismantled trade barriers between nations post-World War II. This was a logical response to the tariff war climate of the 1930s that played a significant role in igniting World War II.

Unfortunately, EU officials had other things in mind once the EU’s tariff policy was consolidated. As Ron Paul notes, corruption and political ambition got the best of the EU, turning it into “an unelected bully government in Brussels, where the well-connected were well compensated and insulated from the votes of mere citizens.”

The EU has essentially subverted what made Europe prosperous — jurisdictional competition between countries. Europe’s federalist system was a clear contrast to empires in the East like China and the Ottoman Empire. Eastern empires spanned large geographic regions, requiring a massive bureaucratic apparatus and heavy-handed rule to maintain any semblance of political order. For that reason, Europe grew rich while the latter empires grew stagnant and oppressive well into the 19th century. However, Europe has rapidly abandoned its successful federalist model and replaced it with a “centralized political, economic, and financial superpower in Brussels.”

Indeed, the UK’s exit from the European Union is not a get rich scheme. At the crux of national sovereignty is the right for countries to fail. Former Member of the European Parliament Daniel Hannan hit the nail on the head in an interview with the Austrian Economics Center:

It’s no secret the EU views concepts such as decentralization with disapproval. For “progressive” institutions like the EU, classical liberal concepts of limited government and smaller political units checking bigger units are toxic roadblocks that keep it from realizing its universalist vision. The British Isles, on the other hand, have historically been the cradle for classically liberal practices such as federalism, free speech, and property rights.

Recent developments have indicated that the EU is hell-bent on discarding basic civil liberties. For a start, the European Court of Human Rights has been fining and prosecuting people for making unsavory remarks about certain religious figures. Controversial Dutch politician Geert Wilders was dragged into court and tried on five counts of “hate speech and discrimination for his anti-Islamic remarks in the media between 2006 and 2008 and in a controversial 17-minute film.” In Wilder’s case, he was acquitted of all charges.

In the same vein, Article 13 of the EU Copyright Directive has raised concerns due to its anti-free speech implications. Some argue that this provision of the EU Copyright Direct would threaten the existence of memes. Labeled as the “meme killer”, Article 13 would mandate “web giants to automatically filter copyrighted material — songs, images, videos — uploaded on their platforms, unless it has been specifically licensed.” Under Article 13, the ability to share content with any copyrighted material —including memes — could potentially be in jeopardy.

Freedom of expression has been part and parcel of Anglo-Saxon traditions that have been passed down for generations and transplanted to Britain’s former colonies in Australia, Canada, and the United States. For the sake of maintaining a cherished civil liberty such as free speech, leaving the EU would be a wise move for the UK.

Since voters cast their ballots in favor of Brexit, doomsday talk has been common among elites and media commentators. Many have contended that leaving the EU would be a disaster for British trade. However, research shows that the EU is gradually becoming less of a trade priority for Britain.

Approximately 44 percent of British exports in goods and services went to EU member countries in 2017. This is roughly £274 billion out of £616 billion in total exports. Additionally, the EU’s share of the world economy has been shrinking despite growth in its total economic output. In other words, the rest of the world economy is growing faster than the EU’s economy. 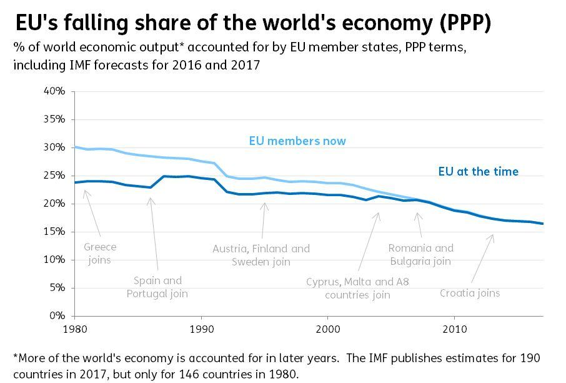 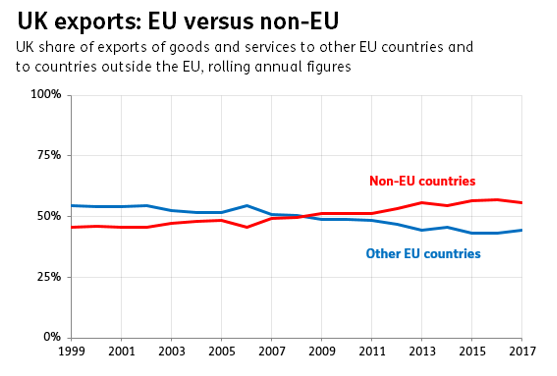 Even if Theresa May does not reach a favorable Brexit deal with the EU, she should consider a bolder alternative:pure free trade. That means zero tariffs and import quotas goods coming from EU countries and the rest of the world.

In such an environment of free trade, the UK could re-negotiate trade deals with members of theCommonwealth of Nations such as Australia, Canada, New Zealand, and Singapore which share a common culture, language, and legal system. Free trade will only strengthen those bonds. Despite the hand-wringing from the pro-EU crowd, the UK has plenty of opportunities to thrive outside of the EU’s jurisdiction.