We discussed the collapse in the VIX earlier, when we pointed out that at least according to the world’s largest bond manager, this artificial market calm foreshadows another surge in volatility just around the corner, which is also why Pimco’s CIO had one recommendation: start selling now.

However, while Pimco may be accused of merely talking their book, there is another empirical indicator which suggests that a violent market reversal may be imminent.

However, as Wells Fargo’s in house derivative strategist Pravit Chintawongvanich observes, this surge in the probability of a recession is at odds with the implied one-year equity volatility which as discussed earlier, is now trending below its 2018 average. 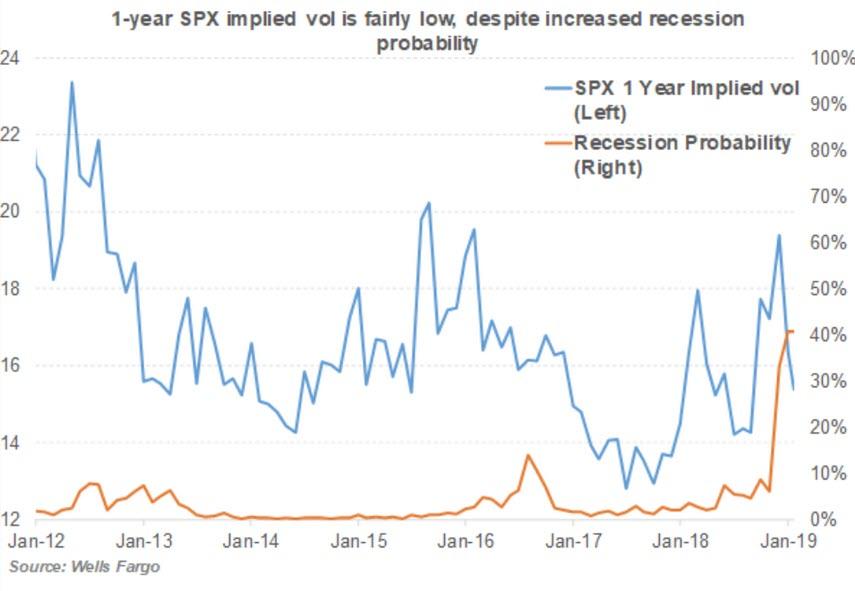 Yet while on the surface this is merely the latest discrepancy in a market where nothing makes sense anymore thanks to central bank manipulation of every asset class, according to Chintawongvanich the divergence has more ominous overtones:  a similar gap emerged just ahead of the 2008 financial crisis.

“In 2007, 1-year vol traded at very low levels despite recession risk having increased rapidly in 2006,” said Chintawongvanich adding that “It was only when Bear Stearns started running into trouble in summer 2007 that 1-year vol rapidly repriced.” 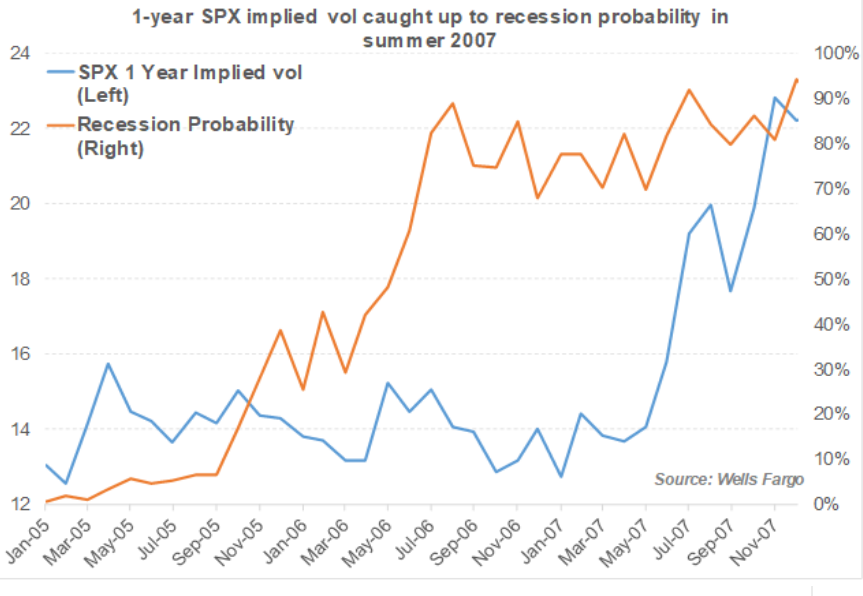 Which once again begs the question: what event will be this cycle’s “Bear Stearns” catalyst.

But before you panic, Wells has soothing scenarios for you to consider: according to the bank’s recession model, there were at least two occasions – in the 1960s and 1990s – when a similar dovish pivot from the Federal Reserve as we experienced in January, was able to extend the economic cycle even as recession odds crept up. The similarity to 1966 may be an especially apt comparison to the Fed’s ability to delay a recession, Chintawongvanich notes. That’s when – just like now – Bloomberg notes that the yield curve inverted even as labor markets remained strong but most other parts of the economy deteriorated and stocks entered a bear market, which in turn prompted the Fed to start an easing cycle at the end of the year that warded off a recession… but only temporarily.

As Deutsche Bank explained two weeks ago, in “The Fed’s Policy Error Is Right Out Of The 1960s“, just like now, the Fed was more concerned by the stock market and stayed on hold in 1966 and even cut rates in early 1967 as growth, fiscal spending and inflation went higher. While this likely prolonged the cycle and re-steepened the curve, it also reinforced higher inflation and by the end of 1967 the Fed were forced to reverse course and start a hiking cycle. The curve then re-inverted and by the end of the decade the recession arrived four years after the first curve inversion.