Authored by James George Jatras via The Strategic Culture Foundation,

A survey of nations in what was once known quaintly as the Free World shows some of them engaged in what could best be described as a cold civil war.

Such a condition is inherently unstable. One possible future is one where the cold conflict becomes hot with unforeseeable consequences. Another is that one side successfully represses the other before violence reaches a certain threshold. 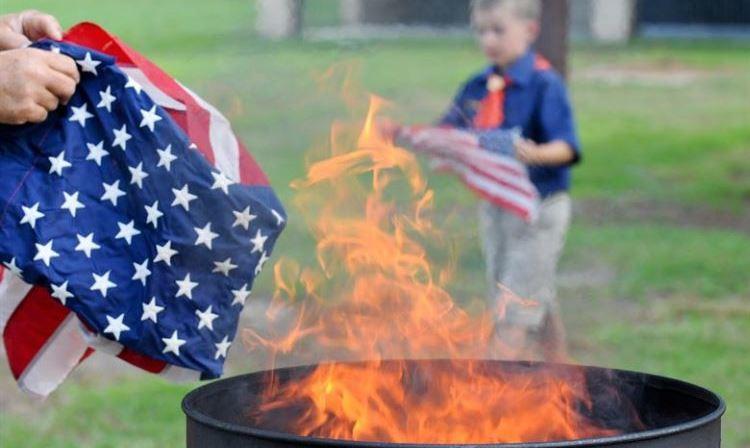 Now before we go any further, let’s make one thing clear. Whatever the country and its specific ills, we can be sure that Vladimir Putin is the culprit. According to Stephen Collinson of CNN (“Another good day for Putin as turmoil grips US and UK”):

‘In London, Theresa May on Tuesday suffered the worst defeat in the modern parliamentary era by a prime minister, as lawmakers shot down her Brexit deal with the European Union by a staggering 432 votes to 202.

‘The United States, meanwhile, remains locked in its longest-ever government shutdown, which is now entering its 26th day, is nowhere near ending and is the culmination of two years of whirling political chaos sparked by President Donald Trump.

‘It’s hard to believe that two such robust democracies, long seen by the rest of the world as beacons of stability, have dissolved into such bitter civic dysfunction and seem unmoored from their previous governing realities. [ … ]

‘The result is that Britain and the United States are all but ungovernable on the most important questions that confront both nations.

‘The Russian leader has made disrupting liberal democracies a core principle of his near two-decade rule, as he seeks to avenge the fall of the Soviet empire, which he experienced as a heartbroken KGB agent in East Germany.

‘Russia has been accused of meddling in both the Brexit vote and the US election in 2016 — the critical events that fomented the current crisis of the West.’

It isn’t exactly clear how the “meddling” of which the coryphaeus of the Kremlin is merely “accused” managed to entice Theresa May into botching (or sabotaging) Brexit talks or to embolden Donald Trump into finally standing his ground on his top campaign pledge. Even Collinson admits that folks in the US and UK may have had something to do with the ruckus: “Supporters of Trump in the US and Brexit in Britain see their revolts as uprisings against distant or unaccountable leaders who no longer represent them or share their values.”

Harrumph! Why should anyone care what the great unwashed think about accountability or values? What matters, say “skeptics” like Collinson, is that the proles’ getting uppity might be “deeply corrosive to the international political architecture that has prevailed for over 70 years.” Let’s get our priorities straight!

While Britain and the US are entertaining distractions, the current main feature is the jacquerie going on in France. To be sure, many wonder if les gilets jaunes are a genuine, grassroots rebellion of ordinary Frenchmen, or some kind of Astroturf comparable to “color revolutions” that western governments and their accomplices like George Soros have sponsored in many countries. While there is some evidence of agents provocateurs (the expression is French, after all) working for the Emmanuel Macron regime – can we start using that word now, like “Assad regime,” “Putin regime,” etc.? – and minor involvement of groups like Antifa committing vandalism with an aim to discredit the yellow vests, the definitive attestation of authenticity was pronounced by world-class poseur and shill for plutocracy and warmongering, Bernard-Henri Lévy: “It’s a real social movement, but it’s one driven by sad, mortifying, and destructive forces.”

Any movement Lévy calls sad, mortifying, and destructive – that’s French for “deplorable” – can’t be all bad, especially with some monarchists involved. It’s rather ironic, though, given that barely a year ago some were comparing vain little Macron to Napoleon.

What is perhaps most detestable to bien pensants like Collinson and Lévy is that the social basis of the yellow vests is readily identifiable. They’re who we used to call simply French working people. As geographer Christopher Guilluy describes in Spiked:

‘Paris creates enough wealth for the whole of France, and London does the same in Britain. But you cannot build a society around this. The gilets jaunes is a revolt of the working classes who live in these places.

‘They tend to be people in work, but who don’t earn very much, between 1000€ and 2000€ per month. Some of them are very poor if they are unemployed. Others were once middle-class. What they all have in common is that they live in areas where there is hardly any work left. They know that even if they have a job today, they could lose it tomorrow and they won’t find anything else.

‘Not only does peripheral France fare badly in the modern economy, it is also culturally misunderstood by the elite. … One illustration of this cultural divide is that most modern, progressive social movements and protests are quickly endorsed by celebrities, actors, the media and the intellectuals. But none of them approve of the gilets jaunes. Their emergence has caused a kind of psychological shock to the cultural establishment. It is exactly the same shock that the British elites experienced with the Brexit vote and that they are still experiencing now, three years later.

‘The Brexit vote had a lot to do with culture, too, I think. It was more than just the question of leaving the EU. Many voters wanted to remind the political class that they exist. That’s what French people are using the gilets jaunes for – to say we exist. We are seeing the same phenomenon in populist revolts across the world. [ … ]

‘The Parisian economy needs executives and qualified professionals. It also needs workers, predominantly immigrants, for the construction industry and catering et cetera. Business relies on this very specific demographic mix. The problem is that ‘the people’ outside of this still exist. In fact, ‘Peripheral France’ actually encompasses the majority of French people. [ … ]

Think of the ‘deplorables’ evoked by Hillary Clinton. There is a similar view of the working class in France and Britain. They are looked upon as if they are some kind of Amazonian tribe. The problem for the elites is that it is a very big tribe.

‘The middle-class reaction to the yellow vests has been telling. Immediately, the protesters were denounced as xenophobes, anti-Semites and homophobes. The elites present themselves as anti-fascist and anti-racist but this is merely a way of defending their class interests. It is the only argument they can muster to defend their status, but it is not working anymore.

‘Now the elites are afraid. For the first time, there is a movement which cannot be controlled through the normal political mechanisms. The gilets jaunes didn’t emerge from the trade unions or the political parties. It cannot be stopped. There is no ‘off’ button. Either the intelligentsia will be forced to properly acknowledge the existence of these people, or they will have to opt for a kind of soft totalitarianism.’

Unfortunately, “soft totalitarianism” is not out of the question, whether in France or other countries in which populism threatens to upend the elites’ neoliberal gravy train and all the social and moral baggage that comes with it. Guilluy sees the revolt in France as beyond control by the “normal political mechanisms.” That may be true, at least in France, at least for now.

But the US may be another story. At the end of this week all Washington was atwitter with an alleged bombshell (relax, in the US legacy media every other story is a “bombshell,” especially if it involves dirt on Trump) that former Trump attorney, “fixer,” and alleged literal bagman Michael Cohen had actually been instructed by his erstwhile client to commit perjury. Unlike much else thrown at Trump, this story (reported in Buzzfeed, which by total coincidence played a key early role in publicizing the US-UK Deep’s State’s “dirty dossier”) would constitute an impeachable crime. In an extraordinary move, Grand Inquisitor Robert Mueller released a statement through a spokesman indicating the report was “not accurate” but not specifying in what regard. As of this writing Buzzfeed stands by the story and asked for clarification by Mueller’s office, which may or may not be forthcoming.

Whatever the fate of this report, make no mistake: there will be more of the same, an endless parade of them. The fact that such reports might turn out not to be true makes little difference. Their existence is sufficient to keep Trump constantly on the defensive pending his removal, one way or another.

Elizabethtown College Professor Emeritus Paul Gottfried describes how grandees of the GOP are already getting set to restore the status quo ante in collusion with their nominal Democrat adversaries once the interloper is gone:

‘… in the next few years, a working alliance will develop between regular Democrats—particularly New Democrats from red states—and the milquetoast Republican establishment. … Such an alliance would reflect electoral reality, as the Right seems to be growing weaker, not stronger, since the election of Trump two years ago. The ever ambitious Mitt Romney fired on his party’s leader prematurely, but his political instincts may be right after all. The GOP is likely to move leftward because that’s where a majority of the voters are, and if this happens to Trump’s detriment, Romney will hope to pick up the pieces. Neoconservatives and much of the authorized conservative movement would no doubt welcome the Utah senator or someone like him as the kind of “conservative” they could work with were he to run for the presidency.

‘If the elections since 2018 have shown anything, it’s this: blue electoral areas have remained quite solid, while traditionally red ones, even in the Deep South, are up for grabs. That’s because the party perceived as being further to the left has benefited from its growing coalition. If there’s another explanation, I can’t seem to find it. It would not be unusual to have two national parties that are recognizably on the left contending for power. The parties now running the major Western European countries are all to the left of our present GOP.

‘In a possible alliance, the GOP, as the ideologically and electorally weaker side, will readily cooperate with establishment Democrats. They will undoubtedly find such shared concerns as confronting Putin “the thug” and supporting the Likud Party in Israel. They should have no trouble reaching an agreement on giving amnesty to all non-criminal illegal immigrants once Trump is no longer on the scene.

‘There is no reason to think that this political shift won’t continue. We are looking at a process that’s been brought about by college educators, the culture industry, the mass media, and mass immigration, and the momentum may be extremely hard to reverse or even to stop. America’s future won’t necessarily be British Columbia’s, whose provincial legislature features only parties of the left and which hasn’t elected a conservative to a provincial office since the early 1990s.’

The celebrated Sage of Baltimore, H. L. Mencken observed that “Democracy is the theory that the common people know what they want, and deserve to get it good and hard.” This begs the question, though, of who the “common people” are. In contrast to France, where Guilluy’s “peripheral France” is still a majority of the French population, US elites in both parties are looking to the day when America’s “deplorables” are a minority (which we already may be) that will continue to shrink. Anyone who might object to ethnic and moral replacement is clearly a racist and “white supremacist,” comparable to France’s “xenophobes, anti-Semites and homophobes.” In the not too distant future, Guilluy’s “normal political mechanisms” may be more than sufficient to handle what’s left of a disappearing America.

If Trump is going to build that Wall, he’d better do it damn fast.