There was significant shock two months ago when Powell made public the Fed’s dramatic dovish reversal, effectively ending the Fed’s rate hiking trajectory and at the same time unleashing a dramatic market rally. But why? Perhaps it has to do with the popular view that the Fed has an advantage in forecasting and in some cases has “inside information”. In fact, as BofA notes, the Fed’s forecasting accuracy is on par with that of market consensus, in other words rather dismal, and swayed more by the market than underlying fundamentals.

To assess the Fed’s forecasting record, BofA looked at two sets of forecasts: the Board of Governors staff forecasts (Greenbooks) and the FOMC’s summary of economic projections (SEP); whereas the academic literature has focused on the former, BofA examines the SEP forecasts from 2009 to the present.

What it found is that when looking at forecasts for real GDP growth, the unemployment rate and core PCE inflation, the forecast errors increased over time across the board (Chart 3). No surprise. The errors are the largest for GDP, which means that the Fed has the poorest record for estimating GDP. Comparing the forecast errors of the Fed vs the Blue Chip and Bloomberg consensus shows that they are comparable. Focusing on GDP, both the Fed and the consensus has underestimated GDP growth one to two quarters out over this recovery but has significantly underestimated growth thereafter (Chart 4).

Naturally, the Fed’s infamous “dots”, or fed funds projection, will be a function of these forecasts. Given the errors in forecasting growth and inflation, BofA notes that investors should be cognizant of the challenges in predicting the rate path.

Fed Chair Powell has been alluding to such, arguing that market participants shouldn’t overemphasize the path of the dots given that they are only modal forecasts. Nonetheless, they are part of the Fed’s communication strategy and will be under the market microscope in this world of enhanced transparency.

Of course, the current episode in which the Fed unexpectedly hit the breaks on its hiking intentions has striking similarities to what happened in early 2016 when the Fed delivered a hike in December 2015 during a period of heighted uncertainty in markets. Shortly thereafter, the markets and economy were hit by the combination of the surprise renminbi devaluation in August 2015, falling oil prices, Brexit and a rapidly strengthening dollar. Indeed, both Powell and Yellen have recently made parallels between the two episodes with Yellen explicitly stating in a recent CNBC interview that “what’s going on now reminds me a lot of 2015/2016.”

The Fed’s communication shifted quickly back then as well: in December 2015, the minutes focused on the improvement in the labor market and strong growth prospects. By March, the Committee underscored that “global economic and financial developments” posed risks. Indeed, the dots went from 4 hikes to 2 hikes for 2016 between the December and March meetings. The rapid shift in Fed guidance prompted many market participants to argue that the Fed was “one and done” (it was merely put on hold for about a year).

The Fed then stuck with this dovish narrative until the April 26-27 meeting where they again signaled that hikes were on the horizon. But market participants were not pleased and further priced out the possibility of a hike. Finally by the summer, the market moved toward pricing in another hike at year-end as shown below. 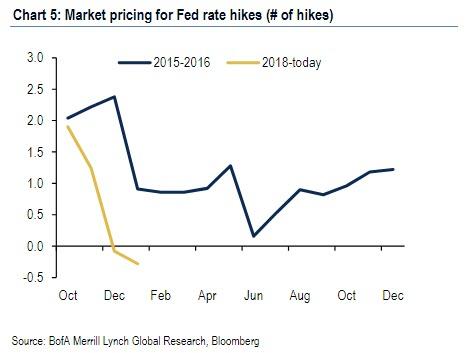 The move down in market pricing and Fed communication is more extreme today than in 2016 but the lesson learned is that expectations can shift fairly quickly. One should note, however, that in 2016 the Fed was not also engaging in QT, i.e., reducing its balance sheet by up to $50 billion per month (if, in reality, the monthly number averages about $36 billion).

Which brings us to the big question everyone is asking: what do we need to see for the Fed to hike again?

According to Bank of America, there are three key signals that traders – and the Fed – should be especially focused on:

BofA concludes that if these three factors hold, market conditions will likely remain accommodative, giving the Fed the green light to consider another rate hike. Furthermore, most Fed officials still believe that we are about 50bp away from neutral rates, as suggested by the long-run dot, which means rates can head higher while still delivering the desired soft landing for the economy.

There is also the risk of a “Powell Call”: if, as many know if don’t necessarily vocalize, the Fed is driven mostly by the market, then when the S&P approaches its all time high above 2,800, it is likely that the Fed’s thinking will make another U-turn, and even though Powell does not want to be seen as flipflopping with the market, he will also be cognizant of the risk of reflating the asset bubble, and purely for the sake of equities, may suggest that hikes are again on the horizon, even if the three key catalysts listed above are not all met.

The challenge, of course, will be how to communicate the hawkish shift without once again shocking the markets.

This brings us to the next two events where Powell will address an audience: the Fed’s semi-annual monetary policy testimony to Congress on Feb 26 and 27 followed by the March 20 FOMC meeting. Powell will likely deliver similar comments as in the January press conference. However, as BofA notes, it gets more complicated in the March meeting as that is when the FOMC will have to release an updated SEP, including a new set of “dots”. In December, the dots signaled three more hikes in total but since then Powell has refused to signal the direction of the Fed’s next move. As such the key question is whether the dots move all the way down to zero hikes? To BofA, the answer is “Doubtful.” This means that Powell might have to dance around the signal from the dots, perhaps underscoring that they are just a forecast… one made by mere mortals who get their forecast wrong more often than not…