Can it really be this easy?  Another Bull Trap With A Doji On Top? 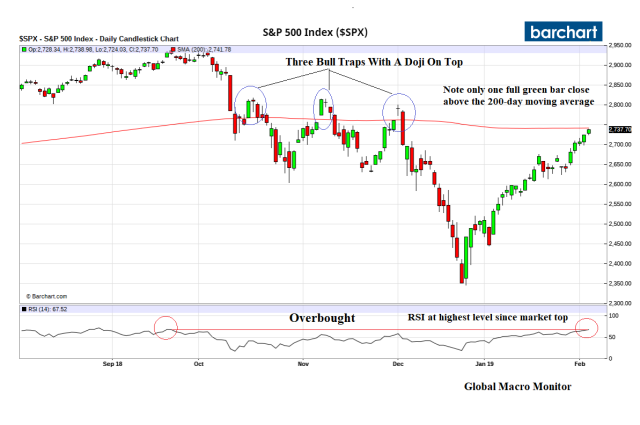 If this bear market repeats or even rhymes with its recent history, here is the scenario:

Wednesday:  The S&P500 trades through its 200-day moving average and closes with a nicely formed green candlestick or an attractive Doji.

Thursday:  The market opens near Wednesday’s close, trades 10-15 points higher, gives it all back then some, only to close unched, tracing out a classic Doji candlestick.   Or, follows up Wednesday’s Doji with a big sell-off back through the 200-day.

Friday:  The bottom drops out of the market and breaks the 200-day.

The market psychology has changed and believes it now owns the Fed.

A China trade deal is going to get done as Trump will be forced to cave on the big issues and the two supers ink probably nothing more than our pig in a poke in the Year of the Pig,

One of Donald Trump’s most persistent economic promises has been to rewrite the U.S. relationship with China. Yet as he approaches a potential deal, some of the very hawks who have cheered on the president’s trade war already fear he may end up falling short.

With less than a month before a March 1 deadline for either a deal or an increase in U.S. tariffs, hardliners inside and outside the administration fret Trump is being outplayed by Chinese President Xi Jinping and seduced by what they see as empty promises.  – Bloomberg, Feb 4th

“Trump is being outplayed by President Xi Jinping” has been an ongoing theme here at Global Macro Monitor.   Never a political statement just analysis and sizing up the competition.

Imagine the global chaos if Trump agrees with Xi on heads of terms and the Fox News Triumvirate —  Sean, Rush, and Ann — start pounding POTUS as weak, just as they did over the first Senate government funding deal, which didn’t include a Wall.  It’s always prudent to price some Mad King risk with this White House.

Because the S&P500 is now so overbought – the highest RSI since the market top – the risk of another facial from a short position is limited, in our opinion. 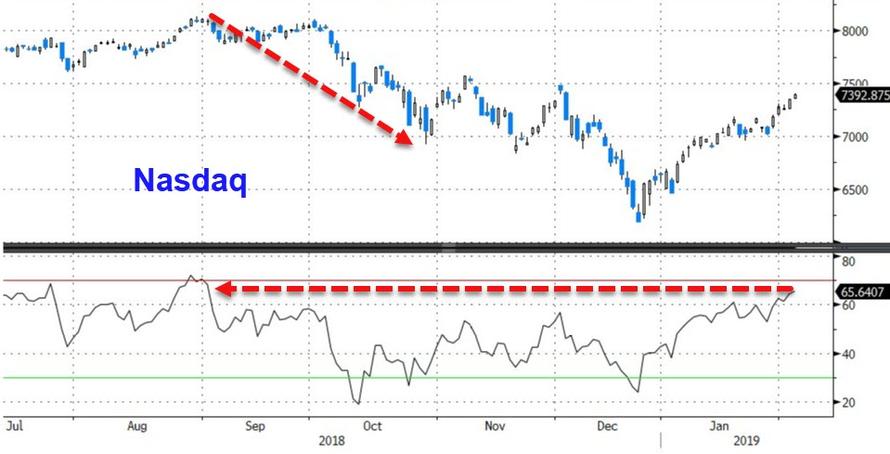 Waiting for the 200-day to be penetrated, then setting a short limit order just a few points below the 200-day, right around today’s close.

Two or three green candle closes above the 200-day sets the index up to challenge the December high and key Fibo at 2800.   Whoops, we were wrong again.

As always we do reserve the right to be wrong, as we, or you, or anyone else, don’t know jack scheisse about the future.