President Trump will renew his demand for a border wall with a few new incentives for congressional Democrats in a 3 p.m. Saturday announcement, according to Bloomberg, citing a person familiar with the matter. Trump teased the announcement on Friday. 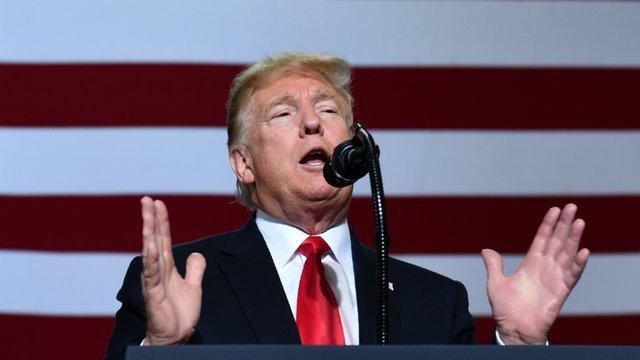 I will be making a major announcement concerning the Humanitarian Crisis on our Southern Border, and the Shutdown, tomorrow afternoon at 3 P.M., live from the @WhiteHouse.

Democrats have thus far refused to allocate $5.7 billion for Trump’s long-promised southern border wall, and have called for protections for young immigrants brought into the United States as children and currently covered under the Obama-era Deferred Action for Childhood Arrivals (DACA) program.

To that end, Axios reports that in exchange for the $5.7 billion in wall money, Trump will offer the BRIDGE Act – which would extend protections for Deferred Action for Childhood Arrivals, as well as legislation which would extend the legal status of Temporary Protected Status (TPS) holders. The deal is said to have been crafted by Jared Kushner and Vice President Mike Pence.

The dispute over the wall has resulted in a partial government shutdown now in its 29th day.

Trump, meanwhile, has threatened to declare a national emergency to bypass Congress and reallocate federal funds for the project – which he does not plan to do on Saturday according to Bloomberg‘s source who was “granted anonymity to discuss the announcement beforehand,” whatever that means.

The Saturday announcement comes on the heels of a contentious week between President Trump and House Speaker Nancy Pelosi, after Pelosi “disinvited” Trump from giving the State of the Union Address later this month. Trump hit back by grounding Pelosi.

Pelosi earlier in the day accused the Trump administration of leaking her plan to fly commercially to Afghanistan, forcing her to scuttle the trip because of the heightened danger, after word of her intentions began spreading among several media organizations.

Trump on Thursday publicly revealed plans for the trip in a letter denying use of military aircraft for her congressional delegation to visit troops in the war zone. A day earlier Pelosi publicly suggested Trump either delay his State of the Union speech or submit it in writing, citing the shutdown.

“The fact that they would leak that we were flying commercial is a danger not only us but other people flying commercial,” Pelosi told reporters Friday at the Capitol. “It was very irresponsible on the part of the president.” –Bloomberg

Pelosi, meanwhile, was seen at Reagan National Airport. Looks like it was a really important secret trip to Afghanistan!