Authored by Mark Perry via The American Conservative,

Despite the storm and fury, the Syria withdrawal policy is unambiguous and going forward… 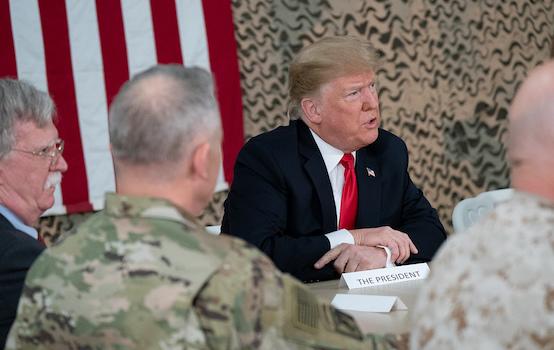 Few other foreign policy decisions of this administration have sparked more criticism than Donald Trump’s announcement that he will remove U.S. troops from Syria. Even as he declared last night during his State of the Union address that “as a candidate for president, I loudly pledged a new approach…. Great nations do not fight endless wars,” he drew a tepid response from Congress. The planned applause line fell discernibly flat.

Perhaps that’s not a surprise, given that the withdrawal has been condemned by leaders from across the political spectrum—including from Trump’s own party. South Carolina’s Lindsey Graham called keeping troops in Syria “vital to our national security interests.” Senator Marco Rubio described the decision as “a major blunder.” Nebraskan Ben Sasse said that Iran, ISIS, and Hezbollah were “high-fiving” the move. Finally, last Thursday, Republican leader Mitch McConnell orchestrated a resolution condemning the withdrawal—which passed the Senate in a lopsided vote.

Graham, Rubio, Sasse, and McConnell have been joined in their condemnation by a host of establishment heavyweights. Richard Haass, the president of the Council on Foreign Relations, called the withdrawal “a bad idea” that constituted a “strategic defeat” for the U.S. Neocon penitent and Washington Post columnist Max Boot said the decision was a betrayal of America’s Kurdish allies—comparing it to America’s serial betrayals of “the South Vietnamese in the 1970s, the Afghans in the 1990s, and the Iraqis after 2011.” A bevy of retired military types joined the chorus, including MSNBC regular General Barry McCaffrey and former Army vice chief of staff Jack Keane, not to mention former Marine General James Mattis, who announced his resignation as secretary of defense following the announcement.

Indeed, the reaction to Trump’s decision was so overwhelmingly negative that Washington pundits speculated that it was only a matter of time before Trump “walked back” the decision by slowing the withdrawal—a deferential nod, it was said, to wiser and more seasoned foreign policy veterans.

In fact, that not only hasn’t happened, the president has dug in his heels, issuing eyeball-to-eyeball orders to military commanders that are anything but ambiguous.

The first such order, according to a senior officer of the U.S. Central Command, which oversees American military operations in the Middle East, came during Trump’s surprise Christmas visit to the al-Asad Airbase in Iraq. There the president (and First Lady Melania Trump) not only joined U.S. soldiers in a high-profile meet-and-greet, but, along with national security adviser John Bolton, huddled with the U.S. high command in a tent set aside for the meeting. Among the team that met with Trump was U.S. Ambassador to Iraq Douglas Silliman and Lieutenant General Paul LaCamera. Of the two, LaCamera was the more important, as he is the commander of the Combined Joint Task Force-Operation Inherent Resolve (CJTF-OIR), the military organization established in October 2014 to “degrade and defeat” ISIS.

After an extended question and answer session with the press on December 26, Trump was privately briefed on the anti-ISIS effort by LaCamera, who told the president that only a few pockets of ISIS militants remained in Syria’s Euphrates Valley. Trump praised the effort, I was told, but then issued his order.

“I want us out of Syria,” the Centcom officer with whom I spoke quoted Trump as saying. “There wasn’t anything ambiguous about it,” the Centcom senior officer added.

“There were no qualifiers, no conditionals, and so far as I know, nothing about that conversation has changed.”

Put another way, while any number of civilian Pentagon officials speculate that the military has been given leeway in implementing the president’s directive, that is not the understanding among senior Centcom officers. “Nothing has changed since that meeting,” I was told. “We’re out.”

Trump’s decision provides a window into what actually constitutes a direct order from a president and how it is implemented—while also separating fact from noise. On December 30, four days after his visit to Iraq, Senator Lindsay Graham told reporters that he would try to persuade Trump to rethink his decision, to “sit down with his generals and reconsider how to do this.” His goal, Graham said, was to “slow this down. Make sure we get it right.” Graham’s effort came the next day, during a lunch meeting with Trump and General Joseph Dunford, the chairman of the Joint Chiefs of Staff, at the White House. Graham emerged from the meetingreassured, hinting that his efforts had been successful.

“After discussions with the president and Dunford, I never felt better about where we are headed,” he said triumphantly.

“I think we’re slowing things down in a smart way.”

Triumphant or not, Graham had not, in fact, persuaded Trump of anything, outside of an agreement that the Syria withdrawal would not be immediate but could take at least 90 days to implement. But that was already in the cards—as it takes at least 90 days to withdraw 2,200 troops from anywhere.

“You don’t just back up a truck and throw in some boxes,” retired Colonel Kevin Benson says.

Benson would know. A West Point graduate and former director of the Army’s School of Advanced Military Studies, Benson developed the plan for the ground invasion of Iraq in 2003, before eyeballing the final U.S. troop withdrawal in 2011. That pullout, which involved extracting the final 50,000 U.S. troops from Iraq, took one year to carry out. Benson adds that it will not only take 90 days to withdraw from Syria, it is likely the withdrawal will include a temporary increase in the number of troops deployed in the country.

“You actually have to add to subtract,” a civilian Pentagon official told me, “which means deploying logistics personnel onsite to implement, catalogue, and coordinate the withdrawal. We’re at 2,200 right now, but as the withdrawal accelerates, we’ll be adding people. It’s the nature of the beast.”

Which is only to say that, while Trump’s Syria withdrawal decision has been derided by a cross-section of the foreign policy establishment, the announcement was greeted with a collective shrug by most senior military officers. A planner at Centcom headquarters in Tampa was puzzled by the controversy over the Trump announcement, saying that the only response he received was from officers “whose immediate reaction was not whether this was a good or bad decision” but how quickly and effectively it could be implemented.

While military officers are loathe to express an opinion on any president’s decision, Trump’s plan tends to break down along traditional (and predictable) service lines, with the deepest disagreements between senior Army officers and their Air Force counterparts.

“Getting out is not a good option,” a recently retired Army officer who advises his former service (and reflects their views) told me.

“The calculus on this is pretty straightforward, and I would argue that you actually gain more by staying in than by getting out. Staying in yields better outcomes. People say that we should get out because we’re not winning. But not winning is not losing: losing is losing.”

What the U.S. should want, this officer says, is “to keep the worst that could have from actually happening. And when you pull out like this, you increase the chances of that.”

Retired Air Force Lieutenant General Dave Deptula, an outspoken and influential voice on the use of airpower (and the head of the Mitchell Institute for Aerospace Studies), disagrees. Deptula argues that the reason it took four years to degrade and defeat ISIS is that the Pentagon “adopted a ground-centric strategy that took four years to implement. It was based on assisting the Iraqis to build up their ground forces first instead of destroying ISIS in Syria first.” Deptula continued:

“In fact, there was actually very little thought given to another option—which would have been to use our real strength, which is airpower. We did that in Iraq in Operation Desert Storm, we did that in Afghanistan after 9/11. And it worked.”

More simply, as Deptula wrote in an influential assessment of Trump’s decision in the pages of Forbes, the Pentagon’s judgment that degrading and defeating ISIS would take time became a self-fulfilling prophecy. “Military leadership with a genuine joint-force perspective and a clear-headed appreciation of the problem at hand,” Deptula wrote, “would have recognized that a focused, intense air campaign against the Islamic State, with all its immediately targetable vulnerabilities, could have far more rapidly decomposed its ability to function.”

Which is simply to note that the continuing cross-partisan condemnation of Trump’s Syria decision (that it’s a kind of “Exhibit A” of his constant bungling) is hardly unanimous. It certainly isn’t in the military, despite the protests of the celebrated General Barry McCaffrey (we must remain in Syria, he argues, “to consolidate our gains”) or the resignation of uber-soldier James Mattis. Indeed, for perhaps the first time in his presidency, Trump has succeeded not only in confusing his critics but (perhaps inadvertently) flushing them out.

In truth, it’s nearly impossible to ignore the obvious: that those who whinge on about Trump “turning Syria over to Iran” or “betraying the Kurds” are the same people who got us into this mess in the first place.