In 2019, the global population is an astonishing 7.7 billion persons (black line, chart below) and in this year alone, earths human population will increase by about 81 million persons (blue and red columns, below).  As the chart below details, the poor nations will add 61 million while the wealthy nations will add 20 million (I’ll detail these terms below).  This article will explain why despite this seemingly gargantuan population size and growth, it is the geographic and demographic distribution of that growth that deems further economic growth implausible (and more realistically ushers in the “Great Decline”) while meanwhile offers great solace for those concerned about environmental and resource depletion issues. 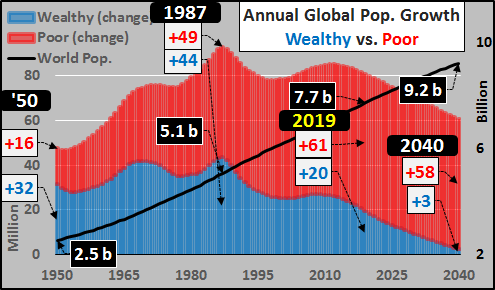 From an annual percentage growth perspective (below), population growth has decelerated for over five decades and this trend is continuing, unabated.  The growth among the wealthy is fast receding and will turn to decline within a few decades while poor nation growth is receding, but far more slowly.  Further deceleration is a near certainty, due to little to no growth among child bearing age populations and ongoing declining fertility rates, world-over.

This article splits the world in two essentially equally sized buckets, the 3.9 billion among the “wealthy nations” versus the 3.8 billion among the “poor nations” (based on UN 2017 World Population Prospects and World Bank 2016 GNI per capita, Atlas method).  The wealthy nations annual per capita incomes range from $80 thousand to $4 thousand…averaging around $16 thousand per capita.  The “poor nations” with annual per capita incomes ranging from $4 thousand to as little as a few hundred dollars…averaging around $1600 per capita, or one tenth that of the wealthy nations. 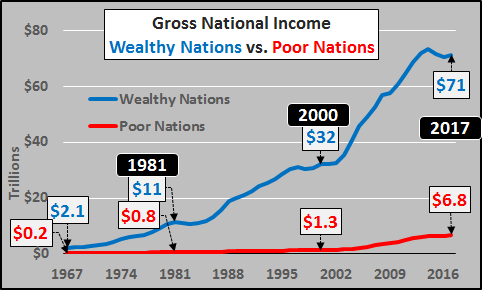 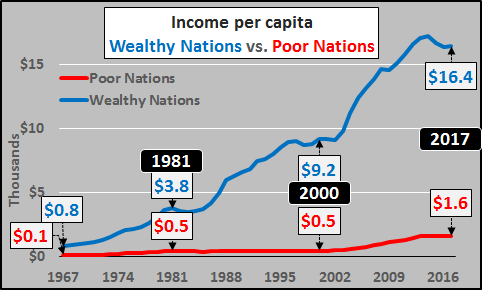 It follows, that from an energy consumption standpoint, the “wealthy nations” consume over 88% of all energy (503 quadrillion BTU’s) versus the “poor nations” who consume 12% (66 Q BTU’s…data from EIA).  This includes all energy types; oil, coal, renewable, natural gas, nuclear, etc (chart below). 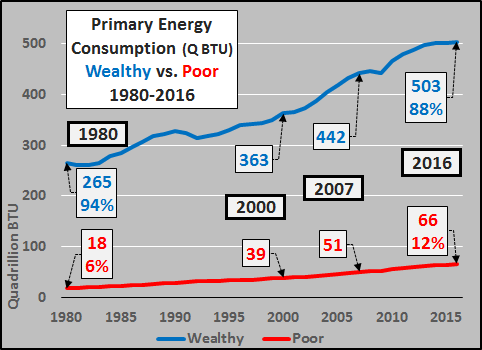 Only by 2018 have poor nation births finally risen by nearly the commensurate quantity that rich nation births fell over twenty years ago.  But once again, wealthy nation births are heading lower, (led again by large declines in China but the declines now are broadly mirrored across the “wealthy” nations).  So, over a 30 year period, the global population rose by 2.5 billion without the addition of a single net new child!  FULL STOP, read that again.   Such was the impact of longer life spans and declining fertility rates nearly everywhere.

A net annual decline of up to 19 million “wealthy nation” children and a net annual increase of 18 million “poor nation” children.  Given the great inequality and 10 fold disparity of income per capita, each of the nearly one to one substitutions of poor nation births for wealthy births resulted in a 10 fold decrease in potential global consumption.  This is a not so funny math where a 29% decrease in wealthy births vs. 26% increase in poor births equals a 90% decrease in that populations potential consumption!  As this population is now entering adulthood, each year represents about a 25% to 30% decrease in the annual consumptive capacity than that seen in 1989!?! 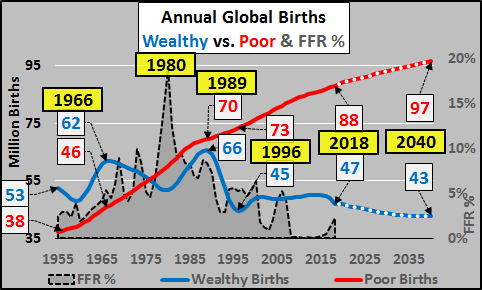 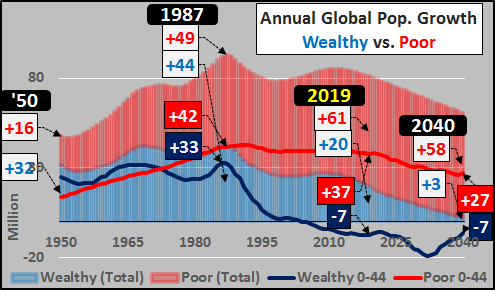 Over the next 20 years, all global population growth among those under 70 years old will be among the poorest (chart below). 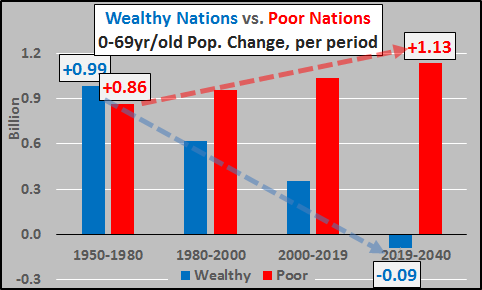 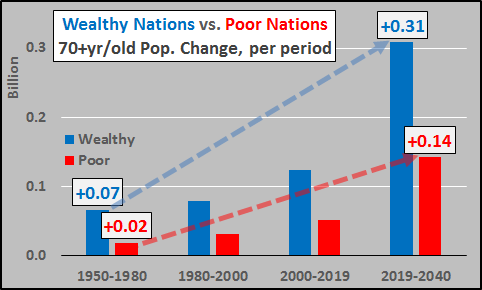 Looking at the change in each age segment below, split between the wealthy and poor, by period.  1950 through 1980 was a period of across the board growth (below). 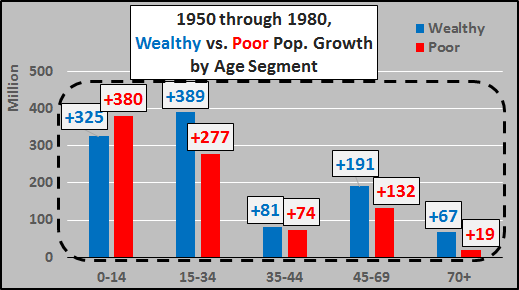 By 1980 through 2000, the declines among the wealthy 0 to 14 year old population set in, but all other segments continued to grow…albeit decelerating growth (chart below). 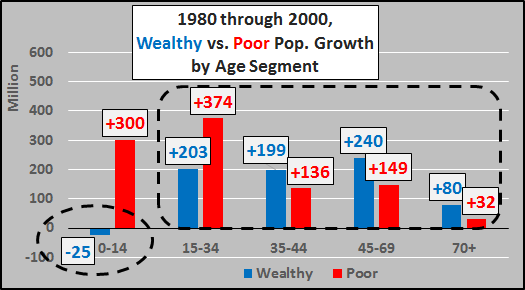 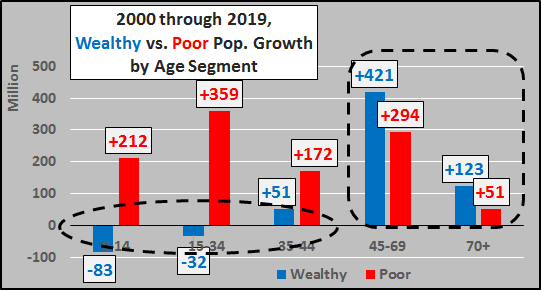 However, the next 20 years will see net declines among the wealthy under 70 year old population.  Even among the poor, the bulk of population growth is shifting to the older, non-childbearing segment of the population. 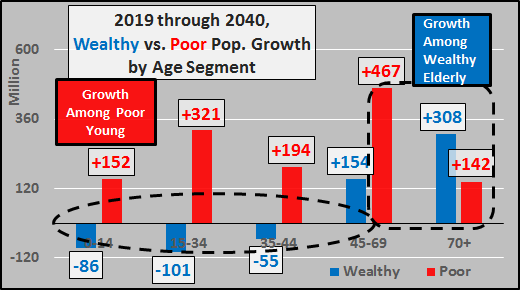 Global economic demand is set to decline as each year, smaller waves of wealthy nation young adults (with the income, savings, and/or access to credit) enters the economy.  The Japanese and German models of exporting their way through depopulation worked so long as the global import tide was rising.  That path no longer exists for Japan, Germany, and in particular, China.  But the minor wealthy population declines result in an asymmetric decline in economic activity.

Without net growth of consumers, far fewer new factories are needed, far fewer infrastructure buildups/outs, far less new housing stocks, fewer employees throughout.  Existing overcapacities are obvious losses.  Absent growth, the over-leveraged and over-indebted fall under the weight of unserviceable loans.  While global urbanization will continue unabated with young migrating to the opportunity of cities, this will only exacerbate and accelerate the rural fall.

The growth of the poor nations population (with only minimally rising incomes relative to the “wealthy”) is nowhere close to offsetting the declines among the wealthy.  In fact, absent the growing “wealthy” demand, the poor nations have a shrinking export market and a declining means to continue their own economic growth and development.

Economic capacity is set to continue rising with innovation, automation, AI, and so many more means to continue creating greater supply.  Simultaneous secularly declining demand and rising capacity resulting in deflation, depression, and further depopulation.  The simple global playbook has been for central banks to lower interest rates commensurate with the declining growth of the consumer population and federal governments to conversely stimulate via lower taxation and greater deficit spending.  This playbook is tired and fraying.  While many search for solutions in socialism, modern monetary theory, even lower tax rates, negative interest rates, mass immigration, trade policies, MAGA, and a hundred other “solutions”; they are inadequate solutions to even the “last crisis” and do not even attempt to understand, let alone solve, the current issues.

On the other hand, I only attempt to pinpoint the problem and hope that brighter and better informed minds that found our way out of the Great War, the Great Depression, WWII, the Cold War, the Great Financial Crisis…can discuss how the brotherhood of man can face and overcome our next and likely greatest inevitable challenge, the Great Decline.