Authored by Michael Lebowitz via RealInvestmentAdvice.com,

“Gradual inflation has a numbing effect. It impoverishes the lower and middle class, but they don’t notice.”

Media reports and political candidates have been stressing the rising wealth and income inequality gaps in the United States. They do so to advance their agendas, but the problem is real and they are justified in raising it. At the same time, both groups are largely overlooking an important piece of the puzzle in the way they talk about it. To properly diagnose this important problem, we need to understand the role the Federal Reserve plays in managing economic growth and how it contributes to these rising imbalances. This article examines the Federal Reserve’s monetary policy objectives and their stated inflation goals to help you better appreciate the role they play in this troubling and growing problem.

Populism on the Rise

The political success of Donald Trump, Bernie Sanders and more recently Alexandra Ocasio-Cortez leave scant doubt that populism is on the rise. Voters from both parties are demanding change and going to extremes to achieve it. Much of what is taking place is rooted in the emergence of the greatest wealth inequality gap since the roaring ’20s.

Over the last twenty years, the “1%” have been able to accumulate wealth at an ever-increasing rate. According to the Economic Policy Institute, the top 1% take home 21% of all income in the United States, the largest share since 1928. The graph below, while slightly dated, shows the drastic change in income trends that have occurred over the last 35 years. 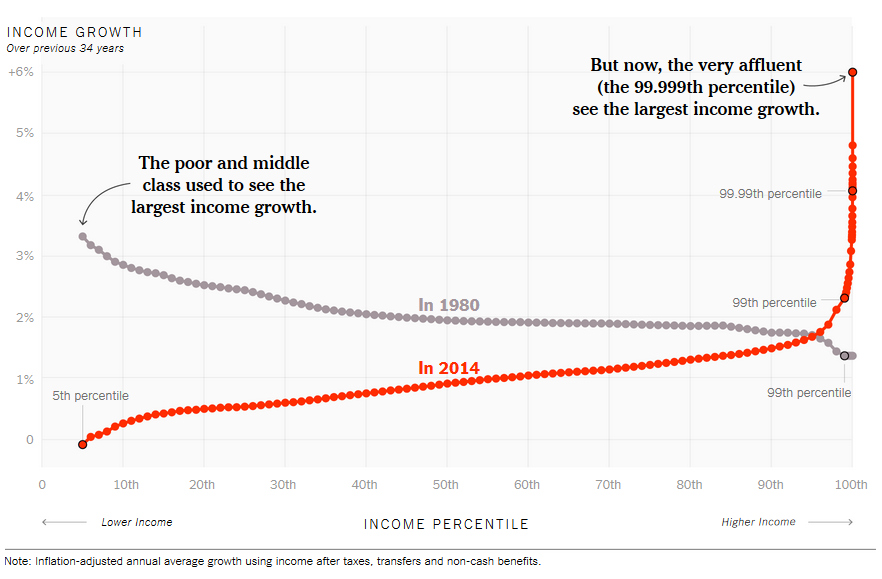 This grab for riches by the few is coming at the expense of the many. There are a variety of social, political and economic factors driving the growing discrepancy, but there is one critical factor that is being ignored.

These broadly-worded objectives afford the Federal Reserve great latitude in interpreting the Act. Among these, the Fed’s mandate for stable prices is worth a closer look. The Fed interprets “stable prices” as a consistent rate of price increases or inflation. Per the Federal Reserve Bank of Chicago, “The Committee judges that inflation at the rate of 2 percent, as measured by the annual change in the price index for Personal Consumption Expenditures (PCE), is most consistent over the longer run with the Federal Reserve’s statutory mandate.”

Understanding why the wealth gap has exploded in recent years requires an appreciation for how this small but consistent rate of inflation harms the poor and middle class while simultaneously enriching the already wealthy.

Wealth is defined as that which is left after consumption and the accumulated results of those savings over time.

With that in mind consider inflation from the standpoint of those living paycheck to paycheck. These citizens are often paid on a bi-weekly basis and spend all of their income throughout the following two weeks. In an inflationary state, one’s purchasing power or the amount of goods and services that can be purchased per dollar declines as time progresses. Said differently, the value of work already completed declines over time.  While the erosion of purchasing power is imperceptible in a low inflation environment, it is real and reduces what little wealth this class of workers earned. Endured over years, it has adverse effects on household wealth.

Now let’s focus on the wealthy. A large portion of their earnings are saved and invested, not predominately used to pay rent or put food on the table. While the value of their wealth is also subject to inflation, they offset the negative effects of inflation and increase real wealth by investing in ways that take advantage of rising inflation. Further, the Fed’s historically low-interest-rate policy, which supports 2% inflation, allows the more efficient use of financial leverage to increase wealth.

Some may counter that daily laborers living week to week get pay raises that offset inflation. That may be true, but it also assumes inflation is measured correctly. The Fed relies upon the Consumer Price Index (CPI) and Personal Consumption Expenditures (PCE) metrics as gauges of inflation. While widely accepted, we all have firsthand experience of the rapid rise in the cost of health care, higher education, rents, and many other essential goods and services that suggests far greater inflation than the Fed’s 2% objective. The truth is that inflation is not measurable with any real accuracy.

John Williams, of Shadow Stats, calculates inflation based on the methods used by the Bureau of Labor Statistics in 1980. Currently, his calculation has CPI running at 9.9% per year, much higher than the latest 2.2% CPI reported. The difference between Williams’ calculation and the BLS’ reported figure is caused by the numerous adjustments the BLS has made to the CPI calculation over the years which has reduced reported inflation. Economists argue that the BLS adjustments provide better accuracy. Maybe, but the record level of wealth inequality and public dissatisfaction offers hard evidence to the contrary. Disagreements notwithstanding, the loss of wealth due to inflation, whether at 2% or 10%, is punishing for those spending everything as it limits their ability to save and accumulate wealth.

Economic growth as measured by Gross Domestic Production (GDP) is the holy grail of all measures of economic advancement. Rising GDP in a debt-based economy depends on credit growth which explains why inflation is so important to policy-makers. The logical conclusion is that the Fed’s primary purpose for running a consistent rate of inflation is to foster credit growth. The growth of credit benefits those who have collateral to borrow against, employ leverage and invest. Again, it is the wealthy that benefit from this. For everyone else, it is a merciless master that makes it difficult if not impossible to maintain one’s standard of living.

The more of one’s wealth that is used for consumption, the more one is subject to the ills of inflation. Additionally, this circumstance also drives a negative feedback loop in that inflation also quietly incents people to consume since goods and services will be more expensive tomorrow than they are today.

While we illustrate the extremes in this article, one can envision how the middle class, which increasingly spend the majority of their wages on consumption and invest little or nothing, also fall into the inflation trap.

The central banking scheme of supporting economic growth through increasing levels of debt only makes sense if “growth at all cost” uniformly benefits all citizens, but it does not. There is a big difference between growth and prosperity. Furthermore, an inflationary policy that aims to minimize the burden of debt while at the same time aggravating the growth of those burdens is taking a serious toll on global economic and social stability.

As we are finding, the United States is not immune to these disruptions.  The source of these problems are accumulating and compounding as a result of the public’s failure to understand why it is happening. This will ultimately lead to further policy-making errors. Until the Fed’s policies are publicly discussed, re-examined and ultimately reconsidered, the problems will not resolve themselves.