One day after the State Department said that the “U.S. does not recognize the Maduro regime as the government of Venezuela” and while it would maintain diplomatic relations with Venezuela it would “conduct our relations with Venezuela through the government of interim President Guaido, who has invited our mission to remain in Venezuela”, which in turn prompted Maduro to order the expulsion of all US diplomats out of Venezuela in 72 hours – an order that SecState Mike Pompeo said the U.S. would ignore – moments ago the US State Department ordered all non-emergency U.S. government employees to depart Venezuela.

Earlier in the day, a socialist party official threatened to shut off electricity to the US embassy in Caracas. The embassy sits atop a lush green hill in the privileged east of the city in the Valle Arriba neighborhood. It’s visible from many parts of Caracas, as is the enormous U.S. flag that flies in the wind in front, according to Bloomberg. Beyond fences and security, the complex has multiple floors underground and could act as a bunker if needed.

Diosdado Cabello, the head of Venezuela’s Constituent Assembly, a politically omnipotent body stacked with supporters of Maduro, made the threatening comments late Wednesday on his state television program. He also insinuated without proof that Guaido, who is being backed by the U.S. and other regional neighbors as the legitimate president, was taking refuge at the Embassy.

“They say they don’t recognize Nicolas,” Cabello said. “OK. Maybe the electricity will go out in that neighborhood, or the gas won’t arrive. If there are no diplomatic relations, no problems.”

Venezuelan Defense Minister Vladimir Padrino Lopez, one of the key brokers to resolve the power struggle going forward, publicly backed Maduro in the past 24 hours while welcoming dialogue with other governments to find solutions. During a press conference today he called the latest developments “very dangerous” and denounced a coup attempt by the opposition.

Pompeo directly addressed the Venezuelan armed forces in his message on Wednesday.

“We call on the Venezuelan military and security forces to continue protecting the welfare and well-being of all Venezuelan citizens, as well as U.S. and other foreign citizens in Venezuela,” Pompeo said Wednesday night. “The United States will take appropriate actions to hold accountable anyone who endangers the safety and security of our mission and its personnel.”

Yet while the US is advising non-emergency personnel to depart the politically unstable country, it did not do the same with “emergency” personnel (it was not exactly clear what is an “emergency” US employee in Venezuela), who however are not exempt from Maduro’s decree, which likely means that after 48 hours, unless something drastically changes, there may well be a major escalation in diplomatic (and not only) hostilities some time on Saturday afternoon, when the 72 hour deadline expires.

The State Department also said the US embassy would remain open. In other words, the state department is calling Maduro’s bluff to test Maduro’s reaction and whether he’d be willing to use force to try to expel them from the country which could in turn trigger a strong reaction from the U.S. including tougher sanctions. It is unclear just how far Maduro, and the military which remains aligned with the socialist president, will be willing to push any potential escalation.

One thing is clear however: while much of the world has sided with the opposition “regime” of Guaido, two notable outliers remain: China and Russia, both of which made it very clear that any US intervention in Venezuela will not be tolerated. Whether the state department realizes that by calling Maduro’s bluff it is doing the same with Russia and China remains to be seen. 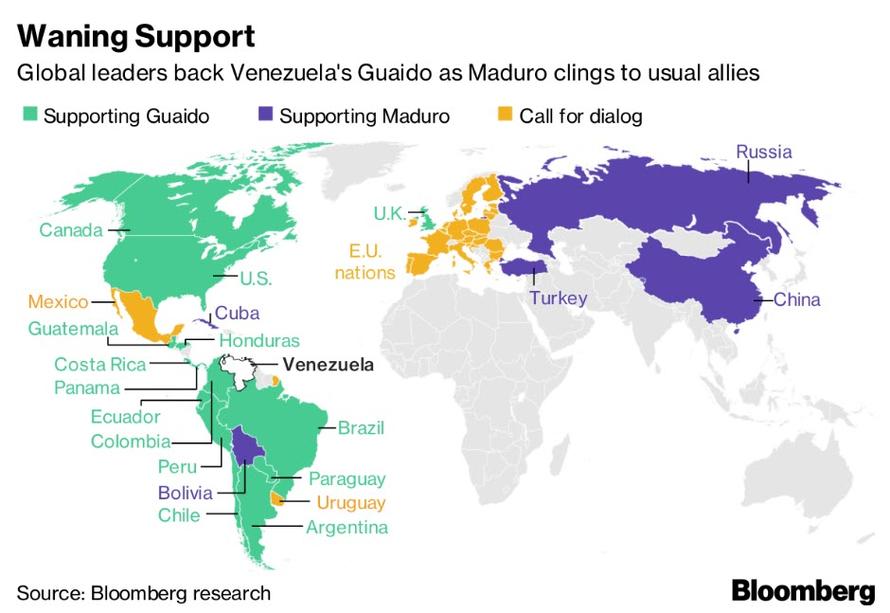 As Bloomberg notes, Venezuela and the U.S. haven’t exchanged ambassadors since 2010. Last year, Maduro kicked out the top diplomats after the U.S. and dozens of other countries criticized his victory in the presidential election as a fraud. The U.S. charge d’affaires is James Story. Efforts to reach him were unsuccessful.