In America, approximately 150 million people are currently employed, doing everything from neurosurgery to greeting customers at your local Walmart Supercenter.

While there is a breathtaking variety of jobs out there, Visual Capitalist’s Nick Routley points out that a few large-scale organizations stand out as the top employer in each state.

THE LARGEST EMPLOYER IN EACH STATE

The U.S. is the third most populous country in the world, so it takes a lot of manpower to keep the government running. It’ll come as no surprise that, in most states, either the state or federal government is the top employer. California alone employs a quarter of a million federal workers.

New York State is a unique case as NYC’s municipal workforce is the top employer.

Technically, the largest employer on the planet is the U.S. Department of Defense, and in eight states, there are more active military personnel than any single private employer.

When we exclude direct government and military employment, a few trends emerge. Universities and hospitals – there is often some overlap between the two – are top employers in nearly half of the states.

In a handful of cases, the top employer reflects an industry that is well known in the region. General Motors, for example, is still the top employer in Michigan. In Nevada? MGM Resorts International, with over 55,000 employees.

When it comes to large-scale employment, there’s one regional trend that stands out the most – the broad blue expanse of Walmart country. 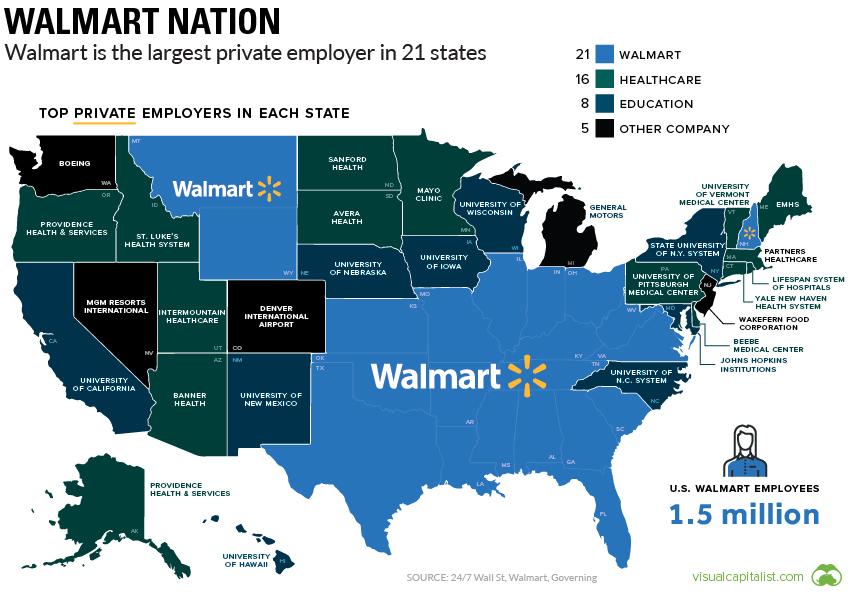 Walmart is the biggest company in the world by revenue, and there are over 3,500 Walmart Supercenters spread around the United States alone. It takes about 1% of private sector workforce in the United States to keep this massive fleet of big box stores running. In Arkansas, that figure jumps up to 4%, with about one-third of the total retail workforce employed at the retail giant.

Here’s a full look at the 21 states where Walmart is the top employer. 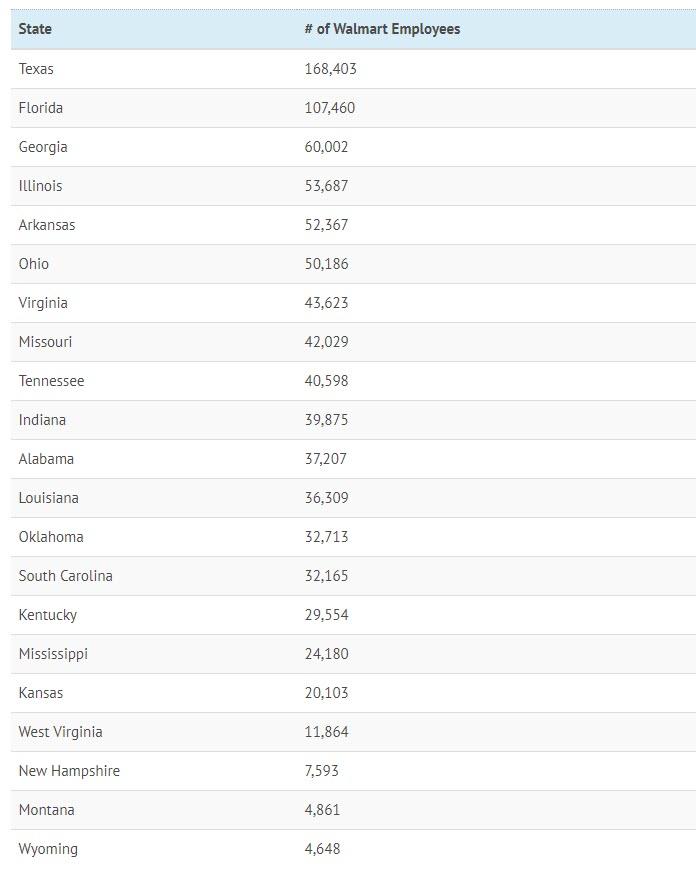 When we talk about the retail industry, it’s impossible to avoid discussing Amazon. The e-commerce company is growing at an impressive clip, and is now the second largest private employer in the country, with over half a million employees.

That said, even with the acquisition of Whole Foods, Amazon still has a long way to go to catch up to Walmart’s massive employee count. The company’s reliance on contract workers and supply chain automation means that this map is unlikely to turn orange in the near future.