Suppose I declare that I am a king. Should you be required to address me as “Your Majesty”? You say, “Williams, that’s lunacy! You can’t prove such nonsense.” You’re wrong. It’s proved by my declaration.

It’s no different from a person born with XY chromosomes declaring that he is a woman. The XY sex determination system is the sex determination system found in humans and most other mammals. Females typically have two of the same kind of sex chromosome (XX) and are called the homogametic sex. Males typically have two different kinds of sex chromosomes (XY) and are called the heterogametic sex.

Governments are beginning to ignore biology and permit people to make their sex optional. Sex can be changed on one’s birth certificate, passport, Social Security card and driver’s license. In New York, intentional or repeated refusal to use an individual’s preferred name, pronoun or title is a violation of the New York City Human Rights Law. If a person born with XY chromosomes asserts that he is a woman, then repeatedly addressing the person by the name on his birth certificate, referring to the person as “him” or addressing him as “Mister” violates the law and subjects the villain to heavy penalties. The law requires acknowledgment that sex is optional rather than a biological determination.

Do the people who support the optionality of sex also support the optionality of age? My birth certificate shows 1936 as my year of birth. Age cutoffs exclude me from many jobs, such as police officer, service member and firefighter. If one can change his sex on his birth certificate according to how he feels, why not his age? I think I’ll petition to change my year of birth to 1972.

Super Bowl LIII made history. For the first time, there were two male dancers working out with a cheerleading squad — in this case, with the Los Angeles Rams’ squad. Men being on the field with female squads is not new. They’ve helped the women with stunts. But Quinton Peron and Napoleon Jinnies danced with the female cheerleaders and performed all the same moves. It’s nice to see cheerleader barriers fall, but there’s another form of rampant cheerleader discrimination that needs to be addressed. I don’t think I’ve ever seen a full-figured older female cheerleader for any professional sports team. Most appear to be younger than 30 and don’t look as if they weigh more than 120 pounds. 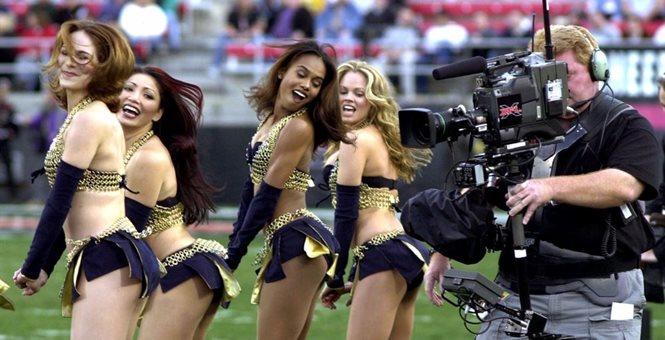 There are other forms of discrimination in sports. There’s a sensible argument that can be made for segregating sexes in football, boxing, basketball and ice hockey. Men are typically stronger and bigger than women, so integrating sports such as football, boxing, basketball and ice hockey would lead to disproportionate injury and possibly death to women.

But what about sports in which there’s no contact, such as tennis, bowling, billiards and swimming? Why should there be men’s teams and women’s teams? Why aren’t feminists protesting against this kind of sports segregation? After all, feminists have ignored the huge strength, aggressiveness and competitiveness differences between men and women in their demands that women be assigned to military combat units.

I have requested an investigation into @USAPowerlifting‘s discrimination against a member of the Minnesota trans community. Respect for human rights includes protections for our trans brothers and sisters. pic.twitter.com/3ou4FsSozA

Refusing to acknowledge chromosomal differences and giving people the right to declare their sex can lead to opportunities heretofore nonexistent. For example, the men’s fastest 100-meter speed is 9.58 seconds. The women’s record is 10.49 seconds. What if a male sprinter with 10-second speed claimed womanhood, ran in the women’s event and won the gold? A lower bar to achieving fame and fortune exists in women’s basketball. It would take only a few tall men who claim they are women to dominate the game.

Suppose a college honored the right of its students to free themselves from biological determinism and allowed those with XY chromosomes to play on teams formerly designated as XX teams. What if an “unenlightened” women’s basketball team refused to play against a team with a starting five consisting of 6-foot-6-inch, 200-plus-pound XYers?

The NCAA should have a rule stating that refusal to play a mixed-chromosome team leads to forfeiture of the game.

It’s no different from a team of white players refusing to play another because it has black players.