This week we expect a rising trend. The main driver of growth will be decline of the US currency that is positive for XAU/USD. On Wednesday April 27 the US Federal Reserve will run its meeting on monetary policy, from which we expect the same comments that were made at the meeting on 16 March. FED will again repeat that the monetary authorities are ready to raise the interest rate at its next meeting either, as soon as strong macroeconomic releases will be received and external risks will be reduced. Yield of the 2-years’ treasuries, which closely correlates with the interest rate, since the last session have dropped by 4 basis points, indicating a lack of probability of tightening of the monetary policy on Wednesday. Fed’s "softness" denies the US dollar a strong trump card. This factor will support the demand in the yellow metal as its price is denominated in US currency. This week we should open Buy positions on decline of quotations to 1225/1203 and take profit around 1255. 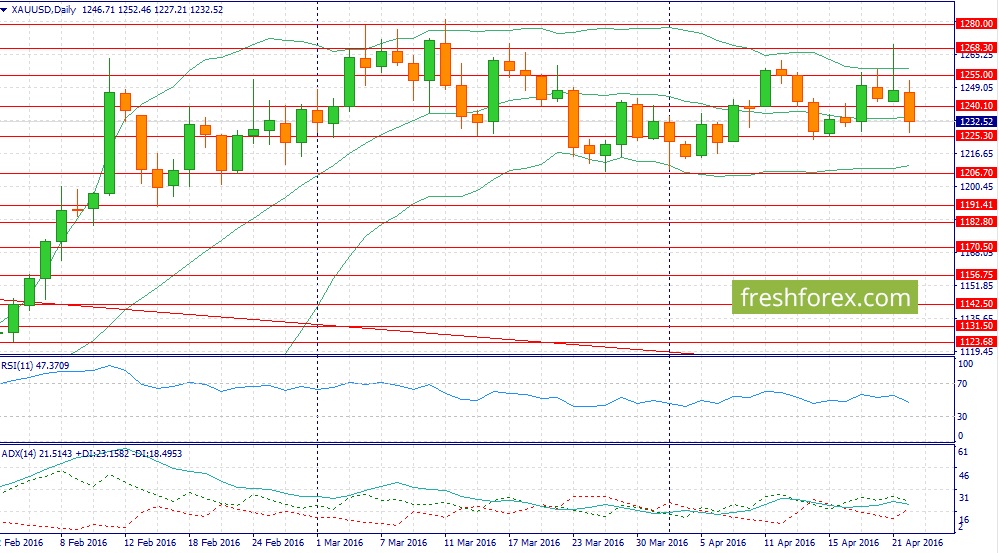 In my opinion, the upward trend of oil is coming to an end, but we still can expect an abrupt surge during the week for three reasons. Firstly, despite the negative outcome of the summit of oil-exporting countries in Doha, "black gold" finished the previos trading week in the "green zone". It says that there are a lot of buyers. These investors have so deep pockets that they can easily make up for the draw downs caused by the negative news background. In this regard, it is rather dangerous to go against this trend – the most wise way will be to join the trend. Secondly, on Thursday USA will publish an advance GDP report for the first quarter and in view of the negative dynamics of leading indicators we can expect the data to be slightly worse than the consensus forecast provides. As we noted earlier, on Wednesday the US Federal Reserve is not going to raise the interest rate. Based on these factors, we can expect decline of the US currency, that will have a positive impact on oil. Thirdly, on Friday the oil service company Baker Hughes reported a drop of the number of US rigs to 8 units down to 43. In the last 12 months, the number of drilling rigs in the United States fell by more than twice. This week we should open Buy positions on drop of quotations to 44.30/43.00 and take profit around 46.90. 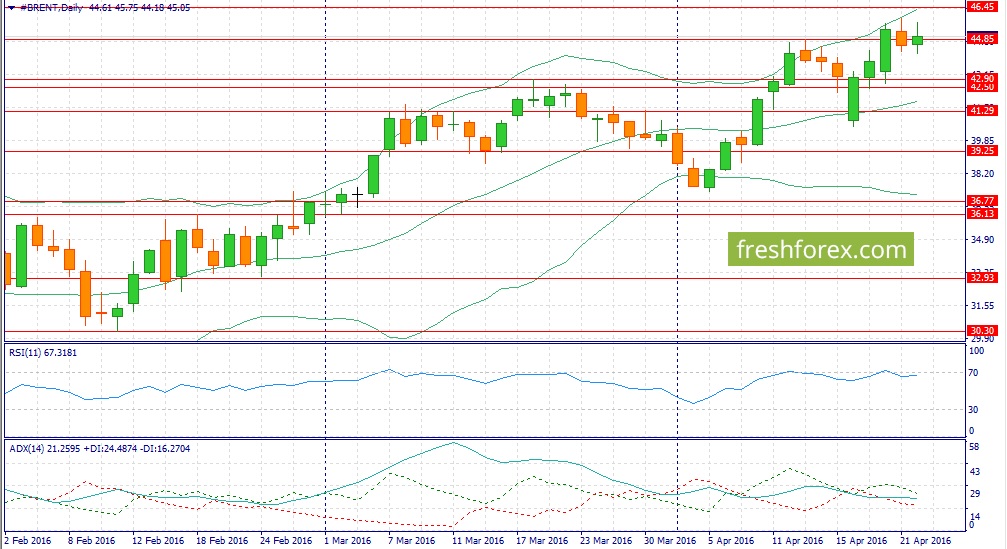 The main events of the coming weeks will be: US Fed’s decision on the interest rate, release of GDP for the first quarter as well as the quarterly reports of such giants as Apple, Facebook and Exxon Mobil. So, first things first. FED’s meeting can have a positive impact on the stock market, as low interest rate attracts investments in the equity securities. The report on GDP, in contrast, could put stock prices under pressure. The advance ISM indicators of the manufacturing and service sectors closely correlate to dynamics of GDP in the first quarter and showed a decline. We should highlight a strong decline in the service sector, which is the core sector for the US economy. The volume of manufacturing production, which is a coincident indicator, dropped by 0.6% in the first quarter. The last thing clearly confirms the negative trend. Since it remains only 2% for S&P500 to reach a historical High, investors may find current levels overestimated and start to settle in profit on long positions. Corporate reports may indicate a drop of Apple and Exxon Mobil’s net profit against a background of declining demand in emerging markets, as well as dropping energy prices. Thus, two of the three factors are negative and therefore we can conclude reasonability of opening long positions. However, financial markets are now in euphoria and investors actively augment their "long" positions in defiance of common sense.This week we should expect the flat within the range of 2035- 2140.