When most hedge funds were facing a surge in redemption requests at the end of 2018, creating a feedback loop of lower prices, liquidation selling, and even more redemption requests, which culminated with the S&P briefly sliding into a bear market on Dec 24, one fund was quietly buying.

At the end of 2018, when stocks suffered one of the biggest drops in years, Norway’s $1 trillion sovereign wealth fund – the world’s biggest – was methodically buying what others were forcibly selling. Despite suffering a 6.1% drop in 2018, its first loss since 2011, the fund did what it does best, and bought some $22 billion in stocks, a “significant” buying spree which continued at the start of this year “to take advantage of a market rout” as it builds its global holdings.

“2018 was a year of contrasting growth expectations and apprehensions about effects of increased trade barriers,” said Yngve Slyngstad, the fund’s CEO. “Concern about economic growth mounted in the fourth quarter, inciting a further decline in equity prices, including in the U.S.”

The Oslo-based fund, which is the world’s single biggest investor holding a whopping 1.4% of all global stocks, remains largely at the mercy of markets when stocks tumble, and as such during sharp corrections it has few choice but to keep buying, although it has some leeway to stray from the indexes it follows. The fund has traditionally loaded up on stocks during selloffs. Not only that, but the fund is now also in the process of raising the share of stocks in its portfolio to 70% froim 66.3% at the end of 2018, to improve returns after struggling through years of rock-bottom rates.

As a result, the fund bought a “significant” amount of equities in January, Slyngstad said a press conference in Oslo, bringing the fund close to its 70% target. This means that, as Bloomberg calculates, the recent stock buying raid added roughly 3% to its equity portfolio.

In terms of specific purchases, the fund’s biggest equity investments in 2018 were the big three: Microsoft, Apple and Alphabet, while its largest bond holdings were U.S., Japanese and German government bonds. Judging by the continued appreciation in both stocks and bonds in 2019, the fund likely continued this trend.

Helping the buying spree with some fresh “dry powder”, the Norwegian government deposited 34 billion kroner into the fund last year, after tumbling oil prices forced its first-ever withdrawals in 2016 and 2017. 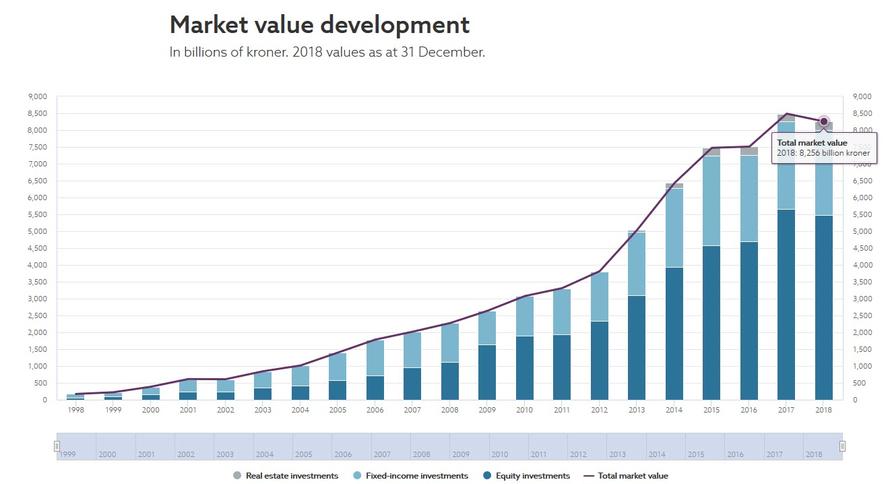 What is most remarkable, however, is that so far every single time it seemed the Norwegian fund – which invests directly on behalf of the Norwegian people – would suffer a major drop, central banks stepped in to rescue the market, something Powell did most recently in late December launching a historic two month rally, and by implication the fund. In other words, Norway’s often cited exemplary “democratic socialist” model owes its biggest debt of gratitude to the money printing organization at the heart of modern capitalism. Perhaps an appropriate question is what would happen to the “Nordic model” the next time markets sell off and the Fed does not step in, resulting in catastrophic losses for biggest sovereign wealth fund in the world.