Nearly five years after a hedge fund billionaire set a new record by paying nearly $150 million for a Hamptons manse in what was, until earlier this week, the most expensive home ever sold in the US, the Hamptons property market is cratering as luxury real estate markets, including Manhattan and Greenwich struggle with a widening chasm between offers and bids. 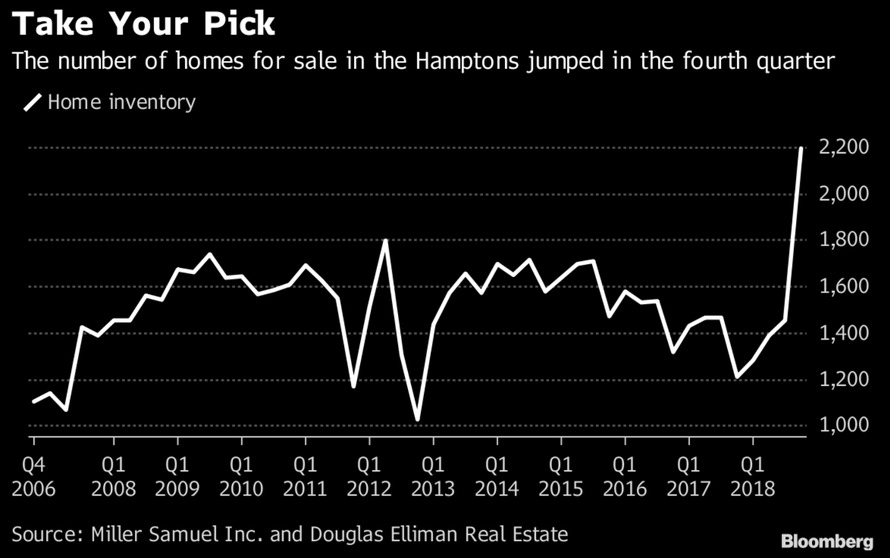 According to Bloomberg, the number of unsold homes on the market in the Hamptons has reached its highest level in the 12 years since data-keeping by appraiser Miller Samuel and brokerage Douglas Elliman Real Estate began. Would-be buyers have apparently decided that their money is better off in stocks (or maybe in cash) after the Trump tax reform killed the SALT deductions. Home purchases during Q4 tumbled a staggering 35%, the biggest drop since 2009, while the median price was stagnant at $995,000. Meanwhile, for the homes that did sell, most were in the lower-end of the market – that is, homes priced between $500,000 and $1 million.

Still, sellers have been reluctant to lower their prices.

With so much inventory on the market, sellers have little choice but to drop their prices. But though it sounds a touch self-serving, brokers would like any potential buyers to know: If this isn’t the bottom of the market, we’re probably pretty close.

Though, to be sure, it’s impossible to tell when the bottom is in…but if this isn’t the bottom, it sure as hell looks like it.

“It’s hard to tell when you’re at the bottom – you don’t hear a thud,” she said. “I think the sense among brokers out here is, yes, we’re at the bottom, and now is probably a good time to encourage your buyers to make a move.”

Despite the flood of inventory, some pockets of strength remained in the Hamptons luxury property market: For the top 10% of sales, prices rose even as sales declined, according to Corcoran Group. Homes in the category traded for a is category sold for a cool $6.5 million on average.

Meanwhile, in East Hampton village, one of the hottest villages in the Hamptons, sales for more than $5 million doubled, driving a 67% jump in the median for the neighborhood to $5.1 million, Corcoran said. Some 15 homes were bought in the village in 2018, up from 14 in the year prior.