Authored by Mike Shedlock via MishTalk,

Proponents of the Phillips Curve keep looking for ways in which it works. Yet, another study concludes it doesn’t.

The Phillips Curve, an economic model developed by A. W. Phillips purports that inflation and unemployment have a stable and inverse relationship. 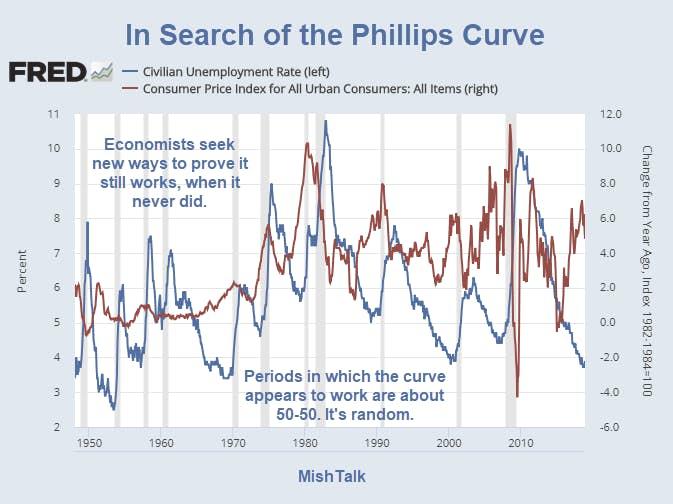 This has been a fundamental guiding economic theory used by the Fed for decades to set interest rates. Various studies have proven the theory is bogus, yet proponents keep believing.

For example, in March of 2017, Janet Yellen commented the “Phillips Curve is Alive“.

Cato noted the Phillips Curve Is Dead (except in Federal Reserve and CBO models).

On August 29, 2017 I noted that a Fed Study Shows Phillips Curve Is Useless. Yet, economists keep trying.

The idea behind the new study was that we may not see wage growth inflation because we are looking in the wrong places.

The new theory was that wage inflation may be expanding faster in states where labor supply was tightest and unemployment the lowest. Check out the conclusion.

In sum, a careful look at the wage Phillips curve across states yields little evidence supporting the contention that wage growth sharply rises as the labor market reaches especially tight conditions. Of course, the current period may be different from the past. For instance, the typical pattern of local wage growth in a tight local labor market may differ when all other nearby labor markets are experiencing similar tightness, as is currently the case. As a result, geographical labor mobility—which can mute wage pressures in tight markets as workers are attracted to higher-wage areas—may be playing less of a restraining role. With this caveat in mind, given the historical experiences of states in recent decades, we do not foresee a sharp pickup in wage growth nationally if the labor market continues to tighten as many anticipate.

Notice how economists still cling to the notion that something may be different now. In reality, the Phillips Curve isn’t dead, it was never alive to begin with.

In response to Absurd Inflation Discussion by Fed Jackasses, Pater Tenebrarum at the Acting Man blog pinged me with this comment:

“It is de facto not possible to measure price inflation or a general level of prices. The latter is simply nonsense, it doesn’t exist. Both money and goods are subject to changes in supply and demand, hence there is no yardstick by which the purchasing power of money could be measured. And this is before we get to the fact that adding up and averaging the prices of disparate goods simply makes no logical sense.”

It’s not just the Phillips Curve either. Keynes thought inflation and recession could not happen at the same time. Yet, people still cling to that too. This leads to:

The bullshit asimmetry: the amount of energy needed to refute bullshit is an order of magnitude bigger than to produce it.

The Phillips Curve isn’t dead, it was never alive to begin with. None of the models the Fed relies on works. Repetitive bubbles are proof enough.