It’s been at least a few months since the US or western nations unveiled some new, broad sanctions targeting Russia, and with the Mueller “collusion” report due any minute, it’s time for Trump to once again remind the audience of the biggest ever soap opera, that he is not a BFF with Vladimir Putin. As such, the FT reports that the US and EU are close to agreeing a raft of new sanctions against Russia, this time in a co-ordinated push aimed at punishing Moscow for its “aggression” towards Ukraine in the Kerch strait.

More than two months after the incident, and despite repeated appeals from the US and EU states to release them, 24 Ukrainian sailors are still being detained by the Russian authorities, after Russian Navy ships rammed and fired on three Ukrainian vessels that Moscow said were “maneuvering dangerously” near the Kerch Strait. The Russian Coast Guard captured some two dozen sailors after commandeering the ships, which included to Ukrainian artillery ships and a tugboat. Russia has refused to release the ships and the sailors despite demands from European and US officials.

The latest move to counter what has been described in western capitals as “a persistent campaign of malign behavior by Russia”, would be jointly applied by the US and the EU.

The new measures will be discussed at a meeting of EU foreign ministers next Monday according to the FT, and could be levied in the next two months, according to diplomats briefed on the discussions.

“This is waiting in the wings,” said one of the diplomats, citing internal documents. The person added that the new sanctions were expected to be tabled by the end of March.

According to a western government official quoted by the newspaper, the sanctions were expected to be directed at those individuals and companies involved in Russia’s seizure of three Ukrainian naval vessels in the Kerch Strait last November.

News of the latest sanctions hit Russian ETFs such as the RSX, while the USDRUB spiked to session highs, jumping from 65.55 yo 66.20 before retracing some gains. 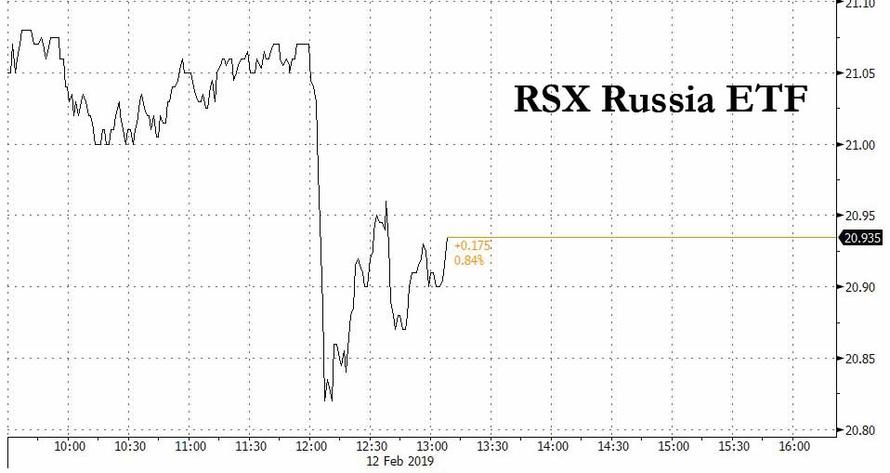